The New and Improved Dick Black. Now, With 33% Less Crazy! 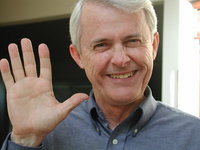 It is amazing how some voters are so easily duped by politicians. Obama was able to fool more than half the country with nothing more than a big bag of hope. Clinton was able to convince millions that he "did not have sex with that woman" just by saying it.


Apparently, we have that same kind of thing going on right here with Dick Black. Several commenters on this blog and elsewhere, formerly skeptical of Mr. Black’s odd antics and carpetbaggery, have now become born-again members of the Black Brigade. Seems he's managed to convince them that he's a changed man, no longer espousing the plastic fetus-mailing views he held as a . . . . cough. . . young man those ten years ago. Nope. Now, he's all about the economy, transportation, jobs. None of that anti-gay, anti-everything stuff he used to say to everyone.

Got news for you, boys. You're been had. Black is playing the oldest game in the politician handbook: tell people what they want to hear. And you are willingly suspending disbelief just because he's the Republican nominee and giving you some attention. Wake up, people!

The fact is that any R is going to vote with the majority of Rs 90% of the time, just like the Ds.  In effect, then, you really are voting the party and not the candidate. The problem comes when the party’s candidate is so distasteful to even those who support the party’s agenda that “hold your nose and vote” just won’t work. That’s how a lot of Rs feel about Mr. Black.

The problem I have is not those who vote for Black because he’s the R nominee – there are, quite fairly, varying degrees of willingness to support for the party’s agenda despite a bad candidate. The problem I have is with those who say that Black has now changed his stripes as a reason for now supporting him. Either they are painfully naive or completely disingenuous. Take your pick.
Posted by Lloyd the Idiot at 9:47 PM