The Most Unpopular Bosses

Lawyers have never been a popular group to begin with, but it looks like women lawyers are the least popular of all.  In a survey of 142 legal secretaries, not a single one of them preferred working for a woman partner.

While it seems a little off topic, the story is worth sharing for its careless disregard for political correctness, particularly in the reasons cited for not wanting to work for female attorneys.
Posted by Lloyd the Idiot at 11:03 AM No comments:

Who the Heck Is Kathleen Murphy And Why Would I Care What She Says About Barbara Comstock? 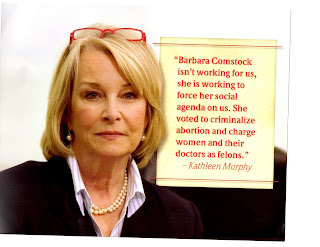 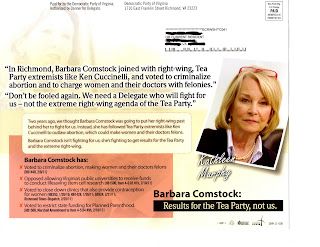 I received a mailer today from the Pamela Danner campaign featuring  a quote from Kathleen Murphy in which she claims Delegate Barbara Comstock "voted to criminalize abortion and charge women and their doctors as felons."  Knowing that Murphy's characterization of the votes was disingenuous at best, I looked more closely at the piece to find out something about Ms. Murphy.

Oddly enough, there was no reference to Murphy's background on the piece - front or back.  So I Googled her and Google Images'd her, too.  Nothing really came up.  She's certainly not the Kathleen Murphy of Fidelity Investments.  And she certainly doesn't look like the Kathleen Murphy who's an intern for the Virginia Democratic Party.

But wait a minute.  Hmmm.  The DPV created and paid for the piece.  Would the DPV actually quote an intern but throw a picture of a more mature lady on one of Danner's hit mails?!  I'm getting the distinct impression that such is the case.   Slea-zy.  I feel sorry for the poor intern who has been so manipulated by the DPV.


At any rate, such pitiful tactics simply show that the Danner campaign is officially in its death throes.
Posted by Lloyd the Idiot at 7:26 PM 3 comments:

I came across a website authorized by commonwealth's attorney candidate Jennifer Wexton in which she claims that incumbent CA Jim Plowman, "has ignored County policies (see Loudoun Admin Policies) by taking possession of County cars for himself and his top assistants in direct contravention of County policies. He has 'forfeited' premium automobiles from the County fleet for his personal use, including a Ford Mustang Convertible and a Mercedes ML55." (emphasis mine)

If you can prove it, you have my vote.  If you can't, you should be sued for defamation.
Posted by Lloyd the Idiot at 4:55 PM No comments:

Angels, as you know, eastern Loudoun County drew the short straw in the redistricting lottery; a handful of traditionally conservative precincts were thrown into other legislative districts having little in common with Loudoun County.  Although we lose a certain kinship with our fellow Loudouners, it's not entirely bad news. For one, we're not as directly subject to the sheer political insanity occurring to the west.  Secondly, we have you three candidates, running solid, responsible campaigns, who present a fantastic opportunity for these eastern Loudoun precincts to be well-represented in three different legislative bodies.

With that, angels, let me summarize your respective missions.

Caren, I'll start with you because you have the greatest challenge.  In a heavily-Democratic senate district, your mission is to convince those voters that your opponent, already unpopular among many Democrats in Arlington and completely invisible outside that county, would be as miserable a senator as she has been a supervisor.  Armed with your incredible business background, your political savvy and a thundering momentum, I am confident that yours will be the upset victory of the political season.

Debbie, your mission is to take out the liberal, self-serving chairman of the Loudoun County School Board..  You'll recognize him by the goatee he should have shaved off when he was 19.  A free-spending Hatrick sympathizer, he knows you're coming.  And he's afraid.


Barbara, as the incumbent delegate, you have a slightly different role.  Facing an underfunded and uninspiring opponent, you are virtually certain to roll to victory, but don't take it for granted.  Keep raising money and fighting your opponent's attempts to distort your record.

Good luck, angels.
Posted by Lloyd the Idiot at 6:23 AM No comments: