Remember all of a week ago how the House Republicans, particularly Del. Bob Marshall, declared that "activists" were unfit for public office because they harbor their own sinister agenda and simply can't be trusted to uphold the Constitution?

Turns out, ladies and gentlemen, they walk among us.  Yessir, right here in Loudoun County.  That starts with L and rhymes with Hell.  And . . .  well . . . that's as far as I've gotten. (Have to throw in a reference to a Broadway musical given the recent comments, you know).

The point is that I'm sure am glad I didn't go to the 10th CD convention yesterday because  I would have been labeled one of those *gasp* ACTIVISTS.   And by none other than new 10th CD chairman John Whitbeck who had this to say about the convention and those with nothing better to do in their lives on a beautiful Saturday that spend it cooped up in a high school auditorium:


Good, God!!  Activists!!  Filthy activists! Sorry, folks, but you're all now ineligible to hold any public post at any level according to certain members of the Virginia House of Delegates.
Posted by Lloyd the Idiot at 10:27 AM No comments:

Yes, it’s more beating on the road sign issue, but this horse ain’t dead yet.

Somehow Fairfax County is comfortable having volunteers issue parking tickets, which, to me, seems very, very hazardous to the volunteers’ safety both in terms of being run over by a car or beaten up by an angry motorist.  Indeed, there’s a far greater risk to the volunteer, and by extension to the county, in that program than one in which volunteers simply pick up trash along the medians.

So to answer my own question as to why the difference, “It’s politics, politics, and more politics.”
Posted by Lloyd the Idiot at 3:24 PM No comments: 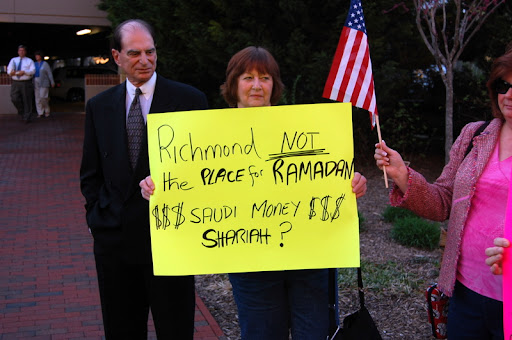 HT: Novascout for the thought provoking post and Loudoun Progress for the photo
Posted by Lloyd the Idiot at 9:37 AM No comments:

It is NOT the Supreme Court, Bob!

For chrissakes, Del. Bob Marshall is opposing a nominee for a General District Court judgeship  for no reason other than the nominee is gay.  Keep in mind that the nominee is a 12 year veteran prosecutor, was nominated by fellow Republican Del. Manoli Loupassi, and is in Loupassi's words, "absolutely well qualified."

Now, also keep in mind that the General District Court decides such weighty issues as traffic tickets, simple assaults and other People's Court-type stuff.  Look, unless your defense to a speeding ticket is that you were late to a pedicure, the fact that a district court judge is gay isn't never going to make a difference. (That's my attempt at Modern Family-style humor, by the way)

Psst.  I think I just saw Marshall and Delgaudio sharing an appletini.  Just sayin'  . . .
Posted by Lloyd the Idiot at 4:32 PM No comments: The Phone Company By Any Other Name . . .

is still the phone company.

Here's a recent story that would make Ernestine proud.

For Mother’s Day, my gift to the War Department was to be a new iphone.  After suffering through a crappy Samsung for almost two years, not to mention two c-sections, I figure she’s earned one.  Her renewal with Verizon Wireless  was due on June 1, so I asked the Verizon Wireless store to allow me the upgrade price two weeks early so I could surprise her on  Mother’s Day.

But nooo.  Request denied.  I even went to a couple different Verizon Wireless stores, but got the same answer: full price $650 instead of the $200 upgrade price, even after the explanation yada yada.   I could not believe just how poor the customer service was.   All for a matter of two weeks.

Then it all came back to me.  Verizon is still very much the “phone company” of old, right down to Ernestine’s famous tag line,  “We don’t care.  We don’t have to.  We're the phone company.”


Posted by Lloyd the Idiot at 3:33 PM No comments:

You may recall my  earlier post about the media attention given the 2% of the bills this General Assembly session dealing with divisive social issues and how the media effectively ignored the achievements  in that other 98%.  While I asked for examples of the achievements in that 98%, the discussion really didn't get too far.  Well, now that the legislative session is over and the governor has signed pretty much all the bills he's going to sign, it is a bit clearer who in Richmond is really doing the work to revive the Virginia economy.

It sure is not worthless, Loudoun-hating  liberal Barbara Favola.  Talk about social agendas.  Favola was the chief patron of bills to increase the gas tax, increase gun regulation and make it easier for convicted drug dealers to get public assistance.  Not surprisingly, they all failed.  In fact, only one of her bills made it through at all (an uncontroversial bill allowing towns to acquire property through a voluntary sale).

Extremists at the other end of the political spectrum didn’t do much to help the economy either.  Dick Black, for example, was chief patron of  a variety of politically-popular-but-economically-irrelevant bills such as immigration inquiry upon arrest, homeschooling, Sunday hunting and the pandemic of the week, Lyme disease.  Like Favola, he did absolutely nothing to move the economy, create job opportunities or bring businesses to the state.

Then there’s Barbara Comstock, a true unsung hero of this legislative session.  She quietly did the (boring) stuff that must be done to keep Virginia competitive.  As just a few examples, she sponsored, and more importantly got through to the governor’s desk, bills that cut taxes on data centers making Virginia more attractive for employers with high-density jobs; limited union control of public works projects; streamlined government agency reporting; and extended the telework tax credit.  That betters our economy.  That makes good jobs possible.  That keeps Virginia competitive.

That is what a legislator is supposed to do.
Posted by Lloyd the Idiot at 3:31 PM No comments:

Raise the Tolls More, MWAA! Really, I Mean It!

My daily commute along the Dulles Toll Road has been much, much more manageable lately.   So clear  that, thankfully, I run the risk of getting a speeding ticket most days.  On the other hand, my alternate route, Route 7 through Great Falls, has remained as crowded as ever.

While the quicker drive on the Toll Road, could be attributable to completion of portions of construction of the Silver Line, a report shows that in the first quarter of 2012, traffic on the Dulles Toll Road was 1% lower over the same period last year.  That decline coincides with a 25 cent increase in the toll at the main toll plaza, effectively following elementary economic theory - the higher the tolls, the fewer the drivers.

Given that absolutely nothing else is working to reduce traffic in this area, I am all for higher tolls on the Dulles Toll Road.   Call me an elitist pig, but I would gladly pay another $1-2 per day to cut my round trip commute time by 10-20 minutes.  In fact, those tolls would probably be less than the taxes I’d pay for construction of new roads and there’s a far more direct effect on my own commute.  In short, the higher the tolls, the fewer crappy drivers in my life.

UPDATED at 9:30 on 5/8: Courtesy of David Dickinson, it looks like I have more to look forward to.   MWAA plans toll increases that will decrease toll road usage by 18% next year alone!  Woo hoo.
Posted by Lloyd the Idiot at 3:30 PM No comments:

The GA Dems' continuing and groundless objection to very, very basic and non-intrusive voter ID laws continues to astound me, particularly in light of  38 actual CONVICTIONS  for voter fraud in the 2008 alone and nearly 200 other cases where authorities believed a crime had occurred but the cases were not prosecuted.

Look, guys, if you need the votes of convicts to win  elections,  you really should rethink your message.
Posted by Lloyd the Idiot at 3:27 PM No comments: