Whether he runs in 2012 or not, his genuine, non-political persona conveys a refreshing honesty that will appeal to moderates and independents as well as hardcore Republicans that, in turn, can build  and energize the base for whomever gets the nomination.  Watch the Face the Nation interview for yourself and you'll see he's the real deal.
Posted by Lloyd the Idiot at 3:44 PM No comments:

WISCONSIN HELD HOSTAGE - Day 7
As a follow-up to my original post about the budget battle in Wisconsin, the AP is reporting that the state Republican leadership has sent state troopers to the homes of  Democratic state senators in the hope of dragging a few into the state capitol to establish a quorum.
Although perfectly legal, such tactics undoubtedly make the Republicans look like thugs.  The better approach, as I suggested before, is to simply wait out the Democrats.  Eventually, the senators, like petulant five year-olds holding their breath, will have to give in.  No need for the Republicans to tarnish the perception that they are the adults here.
Posted by Lloyd the Idiot at 3:41 PM No comments:

Do You Think They Would Have Done This For W?

Oh, the hypocrisy of the Obama Administration knows no end.

Posted by Lloyd the Idiot at 12:15 PM No comments:

Where Does Ron Speakman Really Live?

In a recent comment on Too Conservative, Amy Kelly, a paid campaign advisor for Ron Speakman said in defending a charge Ron Speakman's claimed residence in Leesburg, “Ron has a Leesburg residence that he has owned for over 25 years, and from which he files both Federal and taxes.”  Mr. Speakman's website similarly states he is a "26 year resident of Loudoun County."

The statements, at best, are misleading.  The clear implication from those statements is that he's a long time Loudouner, but note that neither statement actually says he's lived here continuously for that period.  In fact, Mr. Speakman owns a residence in Potomac, Maryland, and it is that Maryland address he used in reporting political contributions made in 2000.

Although I don’t expect a candidate's family to have lived in his district since the Revolution, I do expect unquestionable honesty from any candidate, especially when he's seeking the position of the county’s top law enforcement officer.  Frankly, after what we’ve already seen with Sheriff Simpson, we simply cannot risk a sheriffwho is anything but a "straight shooter" (pardon the pun).  From what I've seen so far, we don't have that in Mr. Speakman.
Posted by Lloyd the Idiot at 10:12 AM No comments:

The Obama administration today unveiled a $3.7 trillion budget complete with a $1.1 trillion deficit.

By way of comparison, Bush 43's last budget (FY 2009) was $3.1 trillion in expenditures with a $400 billion deficit.  In other words, boys and girls, spending has increased in three years by a relatively nominal 19% but  the deficit has increased by 275%.

A fun fact from the AP coverage of this year's record $1.6 trillion deficit: "an astronomical figure that requires the government to borrow 43 cents out of every dollar it spends."
Posted by Lloyd the Idiot at 10:10 PM No comments:

The End of Fannie Mae and Freddie Mac? Not Quite.

As their first act of contrition in atoning for their decades-long indulgence of Fannie Mae and Freddie Mac, the Democrats yesterday unveiled three proposals to increase private sector participation in the housing market, a market, which is now 90%, owned or insured by the federal government.  There’s a lot to say about these proposals, but let me offer my top two points.
First, none of the proposals truly “privatizes” the mortgage market.  Taxpayers are still on the hook for government-insured loans to borrowers who otherwise can’t meet the private industry’s credit standards.  In other words, the taxpayers still will be paying for loans made to people who likely won’t repay them.
Second, even with these continuing government subsidies, all the proposals do result in some degree of higher credit standards and, hence, fewer loans to less creditworthy borrowers.  While that makes perfect sense to you and me, left wing radicals fervently object.  In fact, they already have filed fair lending complaints against lenders who, having recognized the need for tighter lending standards, had imposed criteria for government-insured loans that exceeded the government’s minimal credit requirements.  Yeah, that’s right - liberals are suing banks for making responsible lending decisions immediately on the heels of an economic collapse caused by standards that were too lax.
Bottom line: these reform proposals are a step toward rational mortgage lending, but they are only one step in a very long uphill journey.
Posted by Lloyd the Idiot at 9:16 PM No comments:

THIS is a Businessman I Can Respect 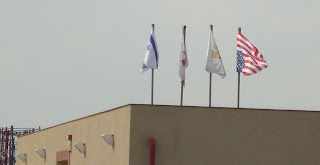 A purchaser for an American spice company, who is a very good friend of mine, today visited a vendor in Tel Aviv and noticed the American flag flying upside down outside the company's offices.  He told his guests about the flag and asked them to fix it, but, by the time he left, it was still flying upside down.

He then emailed the company with this picture, told them that he didn't do business with businesses that didn't respect America and cancelled the $1 million contract.
Posted by Lloyd the Idiot at 10:23 PM No comments:

He Just Doesn’t Get It

﻿ ﻿
Another $53 billion for a shiny new toy train for Barry. Really?
Thankfully, we have a Republican House that can put the brakes on this one.
Cross-posted at http://www.tooconservative.com/
Posted by Lloyd the Idiot at 4:59 PM No comments:

Miller's Redistricting Plan is the Only One Still Standing

The Loudoun BOS rejected eight of the nine redistricting proposals presented to it by the county staff and all six presented by county residents. The only one not rejected was that put forth by Stevens Miller.


Although one would think that it means they'll agree on Millers, don't be so sure. For one, the official census data has not come out yet, and so changes may be required to address the final numbers. Secondly, just because they rejected eight doesn't mean they necessarily like the ninth. Indeed, the Miller plan doesn't even assign four precincts.

That said, the map is still interesting.

cross-posted at http://www.tooconservative.com/
Posted by Lloyd the Idiot at 4:07 PM No comments: