Talk to the Hand 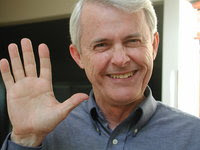 He’s baaaack! God save us all, but it looks like Dick Black is gearing up for something. Glad-handing it up at the last LCRC meeting (and claiming himself as a Sugarland Run resident), Black has reemerged in the political world following his ill-fated, ill-advised 2007 carpetbagging run for Congress in the 1st district. Check out his new Facebook page. Old military and campaigning pictures – and a cheesey profile picture that would make Chester Cheetah envious. The pictures pretty much tell it all.

And what of his “law firm?” The website does not even list a street address (goes with the carpet bagging). Notably, the firm bio also states he “left” the General Assembly in 2006.

Of course, it neglects to mention that he didn’t leave voluntarily.
Posted by Lloyd the Idiot at 10:10 PM