I am an American before I am a Republican 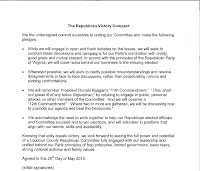 And that’s why I won’t sign The Republican Victory Compact proffered last night by certain members of the Loudoun County Republican Committee.  Chief among my concerns is the implicit, if not explicit, promise not to publicly criticize Republican candidates or officeholders.

Almost daily, we are reminded of our rights to free speech and assembly.  Indeed, robust, candid debate is the cornerstone of republican government, and, accordingly, speech and assembly are among the most jealously protected rights in this country.  Of course, those rights are not absolute and should be exercised fairly and judiciously.  Moreover, one may fairly be expected to yield those rights to a certain degree as a condition to membership in private organizations, such as the local Republican party.  I recognize all that.

Eternal vigilance being the price of liberty, however, I also have an affirmative obligation to protect the republic from all those who would do her harm whether they are foreign or domestic, Republican or Democrat, challenger or incumbent.  It is incumbent upon me to ensure that such people do not hold office in this nation or otherwise direct the nation’s policies.  Therefore, I cannot, consistent with those obligations, tolerate corruption, selfishness or incompetence in any of our leaders or potential leader regardless of party. To pledge silence in the face of such incompetence or corruption is to be an accomplice to it.  To permit a politician to cloak his ineptitude or wrongdoing through party affiliation is to put party over country.

I am not a politician.  I am not a journalist.  I am one voice armed with only a soapbox and a vote.  But I will use all the tools at my disposal to protect my country and to ensure that we have the best leaders for it.  My comments on a candidate’s qualifications, therefore, will be both private and public, electronic and verbal.  If a leader’s character makes him unfit for office, my comments will, by definition, be personal.  Note, though, that I will always seek to offer only truthful, fair and relevant commentary.

I know well many of the people who drafted the compact. I trust them, I respect them, and I know they mean well in the document they have offered.  Perhaps some revision of it would assuage my concerns, but, as it is now, agreeing to be so bound would breach my responsibilities as an American as I see them.
Posted by Lloyd the Idiot at 11:45 AM