From the Ridiculous to the Sublime: Mexico Seeks to Join Suit Against Arizona 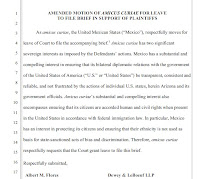 Apparently forgetting that it is neither part of the United States nor an American citizen, Mexico (yes, the country, and not the Richmond restaurant of the same name) has moved to intervene in a suit filed in the U.S. District Court for the District of Arizona challenging the Arizona law allowing police officers to inquire as to nationality. Story here

In its motion to appear as amicus curiae, Mexico contends that its diplomatic relations with the federal government should not be “frustrated by the actions of individual U.S. states.” Moreover, it contends that Mexico has a substantial and compelling interest in ensuring that its citizens illegally in the United States are treated “in accordance with federal immigration law.”

Not to get too legalistic here, but I certainly hope the court denies the motion. The idea of a foreign government intervening in a suit against an American state construing American law in an American court is almost as insane as that same government complaining that, in the end, we’re simply returning its citizens to it.