The Complexity of the Byrd Situation 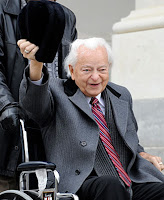 Let me preface this by saying that I hope he makes a full recovery, but the illness of 91 year old Senator Robert Byrd of West Virginia makes for interesting political fodder. If the senator were to resign by next Saturday, July 3, 2010, there would be a special election in November to fill the rest of his unexpired term. If a vacancy occurs after that date, however, the Democratic governor of West Virginia would appoint an interim replacement who would not stand for election until November 2012.