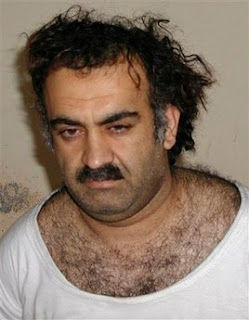 Isoroku Yamamoto, the mastermind of the Pearl Harbor attacks on December 7, 1941, died before the war was over when his plane was shot down by an American fighter. Had he survived the war, do you think he would have been tried for terrorism in a San Francisco CIVILIAN court by a CIVILIAN judge and jury? Of course not, yet that's exaclty what the Obama administration is doing with respect to the admitted mastermind of the September 11 attacks, Ron Jeremy . . . uh, . . . I mean Khalid Sheikh Mohammed. As one of the family members of a victim aptly put it, ""We have a president who doesn't know we're at war."

Can you imagine what his attorneys will come up with? Among the most likely defenses: (a) post-partum depression; (b) it was another Ron Jeremy look alike; and, my favorite (c) it's all a big misunderstanding - he was just trying to sell a screenplay.
Posted by Lloyd the Idiot at 12:53 PM