The Abomination that is Obamacare 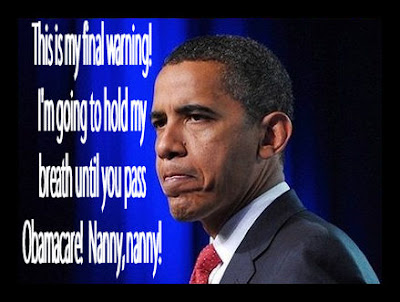 President Obama’s obsession over the health care bill raises, for me, serous doubts about his ability to lead and his manner of governance. First, keep in mind that the bill is not, and has not for some time, been favored by the public whether due to its staggering cost or to the totalitarian and paternalistic provisions requiring each American to carry health insurance. True leadership is taking the correct action, and convincing others that it’s the right thing to do. Maybe in his eyes he’s done the former, but clearly he has not succeeded in the latter.

Second, this massive expansion of the welfare system (and the most expensive ever) is now being rammed through Congress by some parliamentary sleight of hand and by a president acting like a petulant child, holding his breath until he gets his way. Far more reasoned and deliberate consideration must be given to such a great expansion of the role of government. Indeed, we all would be better served if the president simply took his trip to Asia and let this bill be properly examined and debated by the grown-ups.

Third, and perhaps most despicable, is the obvious bribery of members of Congress with promises of pet projects in return for support of the bill. That’s not just an indictment of the president, but the one’s taking the bribes, too. It will be interesting to see just what spoils Kucinich manages to takes home.

Obviously, the political future of this unpopular president depends heavily on the bill’s passage. It was a hallmark of his campaign. But he’s now painted himself into a corner with his antics. Either way the vote goes, he ends up a loser in some fashion.
Posted by Lloyd the Idiot at 9:47 AM